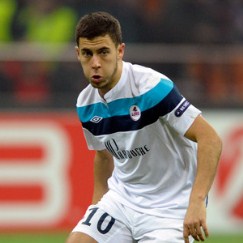 Lille president Michel Seydoux has confirmed that the French club has not yet received an offer from in-demand star Eden Hazard.

The 21-year old Belgian winger has been the subject of plenty of interest from a number of clubs with Premier League outfits Arsenal, Tottenham, Manchester City and Manchester United at the forefront but Seydoux says that nothing has come in for the club’s prized asset.

“”At the moment, I have not received any offers,” Seydoux told Radio Monte Carlo.”

City and United managers Roberto Mancini and Sir Alex Ferguson have reportedly watched Hazard in recent weeks ahead of potential summer bids but nothing as yet has hit the Lille inbox.