Reports are out claiming that Lille striker Salomon Kalou is keeping AS Roma waiting. 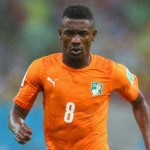 The Mirror reported that the Ivory Coast international is stalling on a £3million move to Roma – because he wants to return to the Premier League.

The 28 year old enjoyed a successful career with Chelsea and fancies a move to back to England with another club.

Kalou would love a move to Arsenal but that now seems unlikely.

However, he is open to a move to another Premier League club with Everton and Liverpool both interested. Coyle : Gary Cahill Has Nothing To Prove Against Arsenal!