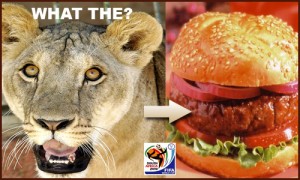 This is something we don’t read everyday, let alone eat.

Offering up lion burgers as a tribute to the World Cup in South Africa is getting a Phoenix valley restaurant into controversy.

The Il Vinaio restaurant in downtown Mesa has received a bomb threat and around 250 e-mails from animal rights activists after it announced it would offer lion as a special to honor the soccer tournament.
“We thought that since the World Cup was in Africa …that the lion burger might be interesting for some of our more adventurous customers,” owner Cameron Selogie told Reuters.
The restaurant is offering the lion burgers at $21, served with spicy homemade chips and roast corn on the cob.
Selogie said that the lion being offered was raised at a U.S. Department of Agriculture regulated free-range farm in Illinois — a fact that has soothed some protesters.
“Most of them, when we tell them the facts, that this is farm raised and it doesn’t hurt the endangered animals, seem pretty reasonable,” he said.