A court statement on Wednesday revealed that Barcelona forward Lionel Messi and his father Jorge have paid five million euros (£4.2million) to the Spanish authorities after they were accused in June of filing false tax returns. 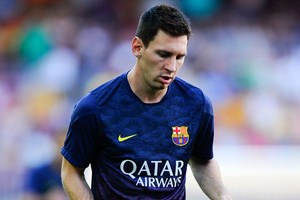 The statement added that they were still due to appear at a hearing on September 17, although their lawyer had asked for it to be postponed as he had another commitment that day.

The Argentine World Player of the Year and his father, who both denied wrongdoing, allegedly hid more than four million euros by filing incomplete returns for the years 2006 to 2009.

The sale of Messi’s image rights had been hidden using a complex web of shell companies in Uruguay, Belize, Switzerland and the United Kingdom, the prosecutor’s office for tax crimes in Catalonia said.

“I never take care of that stuff myself and neither does my father,” the 26-year-old player said in July.

“We have our lawyers and our wealth managers to take care of that and we trust them and they will sort this out,” he added.

“The truth is that I don’t have a clue about all this and that is why we have people taking care of it.”

Iniesta : Everyone Will Be Delighted If Fabregas Returns!