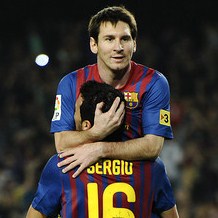 Barcelona star Lionel Messi is is confident that there is more improvement to come from him.

The Argentine sensation has 22 goals in 17 games this season, and believes he is in the right condition to score many more as they prepare to take on an Athletic Bilbao side unbeaten in nine games on Sunday.

“I feel great physically, strong enough to play as many games as possible, like last year,” said Messi.

Having moved past 200 to become Barca’s second-highest goalscorer of all time aged just 24, the question is when, not if, he surpasses Cesar’s record of 235 for the outright crown.

The Argentinian, however, says he is in no rush.

“I’m not aiming to break the record this year,” he said.

“I hope to do it someday seeing that I want to stay here for the rest of my career.”