Reports are out claiming that Barcelona captain Lionel Messi has thanked fans for their support during Argentina’s World Cup run. 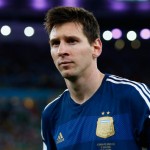 The 27 year old led his country to the final before defeat to Germany.

“I want to say thank you for all the support we have been given since the World Cup finished. It’s really nice to see the whole country excited about the team again,” wrote the striker on Facebook.

“Now we have new and good challenges ahead which we will face with the same commitment. Thanks to everyone.”