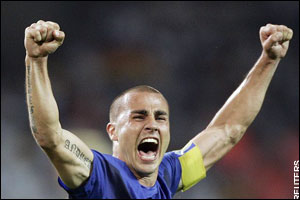 Italy coach Marcello Lippi has declared that he expects Juventus defender Fabio Cannavaro to be cleared after his failed drugs test this week.

Italian international defender Cannavaro claimed he took the anti-inflammatory medication after being stung by a wasp at Juventus’ training ground in Vinovo on August 29.

Lippi however said that he has not heard from Cannavaro and that there was no need for it. Lippi added that it was all dampened down in two hours.

Lippi also said that Cannavaro would be present at Italy’s World Cup qualifier against the Republic of Ireland this weekend despite all the incidents.

The former Juventus Coach then said that the whole incident “has been a little manipulated.”