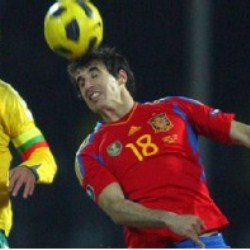 Xavi and Juan Mata combined to make sure world and European champions Spain were not embarrassed by Lithuania on a difficult surface in Kaunas.

Xavi, embarking on his second century of appearances for Spain after winning his 100th cap in their Euro 2012 qualifier against the Cech Republic on Friday, opened the scoring after 20 minutes.

But Marius Stankevicius levelled 11 minutes after the break and it needed the intervention of substitute Mata, who brought about an own goal from Tadas Kijanskas after 70 minutes and finished himself six minutes from time, to decide things in Spain’s favour.

The result extended Spain’s 100% start to their qualifying fixtures, and ensured they kept their lead at the top of Group I at six points over the Czech Republic, who beat Liechtenstein earlier.

Female Fans Sent Off After Flashing At Game – Video