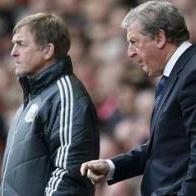 Roy Hodgson had a dream return to Anfield as a farcical Peter Odemwingie goal gave West Brom a 1-0 victory at Liverpool, who had otherwise dominated the Premier League match.

The Nigeria striker capitalised on an inexcusable, underhit pass by Glen Johnson to fire past Pepe Reina, who had made two top saves earlier but stood static as the ball seemed to fly inches past him.

The goal came in a rare excursion past halfway for the Baggies, who rode their luck after sustaining a battering from Liverpool, who hit the woodwork twice, forced a series of saves from Ben Foster and missed countless good chances.

The result – West Brom’s first victory at Anfield in 45 years to the day – means Liverpool stay eighth, just ahead of Fulham on goal difference, with the Baggies a point behind in 10th.