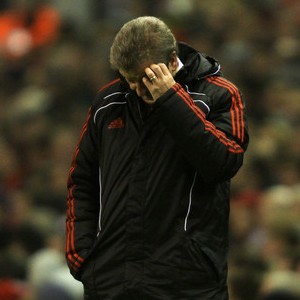 Wolves turned up the pressure on Liverpool manager Roy Hodgson with a shock 1-0 victory at Anfield, thanks to Stephen Ward’s thoroughly-deserved second-half winner.

Mick McCarthy’s side were bottom of the table and had managed only one point on their travels all season, at nearby Everton, but they gave their survival hopes a massive boost by relegating West Ham to 20th place ahead of the New Year.

This was certainly no smash-and-grab raid as the visitors more than matched their illustrious opponents to spark boos at the final whistle and chants for Rafa Benitez and Kenny Dalglish from The Kop.

The focus will be on Hodgson’s position after a shot-shy display that clearly angered the home crowd against well-drilled opponents who showed superior spirit and also skill for long periods.