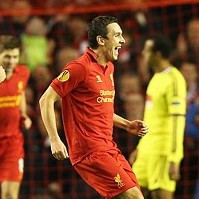 A superb strike from Stewart Downing saw Liverpool claim a 1-0 victory over Anzhi Makhachkala in their Europa League clash at Anfield and move into top spot in Group A.

The win was no less than the Reds deserved having been the better side for much of the contest, and they now lead the group with six points from three games.

Liverpool manager Brendan Rodgers fielded a strong side including the likes of Steven Gerrard and Luis Suarez, resisting the temptation to rest a host of players ahead of Sunday’s Barclays Premier League derby at Everton and making only three changes from the win over Reading on Saturday.