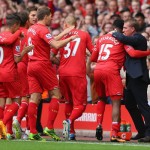 Liverpool secured their best start to a Premier League season since 1994-95 with victory over champions Manchester United at Old Trafford.

Daniel Sturridge celebrated his 24th birthday with his third successive winner of the season by steering in a close-range header in the third minute.

Moyes hoped for better luck with United after 12 games without victory as Everton manager – but his team came up short despite enjoying plenty of possession in the second half after being outplayed before the break.