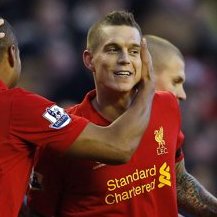 A solitary goal from Daniel Agger was enough to give Liverpool a valuable, if unconvincing, 1-0 victory over struggling Southampton in their Premier League encounter at Anfield.

Southampton, who have now kept just one clean sheet in 15 Premier League games this season, fell behind in the 43rd minute as Agger headed powerfully into the top corner of the net.

Nigel Adkins, who along with striker Rickie Lambert had youth trials with Liverpool, came into the match with his side on a four-match unbeaten run, but that was ended abruptly as the hosts preserved their slender advantage to claim all three points – a result which lifts the Reds into 11th place in the table.