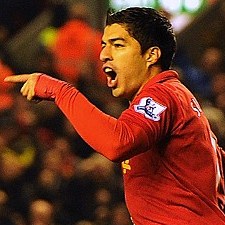 Striker Luis Suarez upstaged Steven Gerrard on a landmark day for the Liverpool captain as he underlined his value to Brendan Rodgers’ side once again.

Gerrard became only the 10th player to make 600 appearances for the club but it was the 25-year-old Uruguay international who stole the show against Newcastle, who finished with 10 men after Fabricio Coloccini was sent off late on.

With Liverpool trailing to Yohan Cabaye’s fine strike late in the first half, Suarez produced a brilliant equaliser – his seventh goal in nine league matches – but just could not inspire his team to victory.

He did, at least, preserve Liverpool’s impressive unbeaten home record against the Magpies which was extended to 18 league matches – 15 of which were wins.