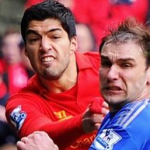 Luis Suarez headed in a dramatic late equaliser for Liverpool against Chelsea in a match in which he appeared to bite Blues defender Branislav Ivanovic.
Oscar headed in a corner to put the visitors in front but Daniel Sturridge tapped in a Suarez cross to equalise.

But an Eden Hazard penalty restored Chelsea’s lead after a handball by Suarez, who appeared to bite defender Ivanovic’s arm shortly afterwards.
Suarez then levelled in the 97th minute to leave Chelsea fourth in the league.