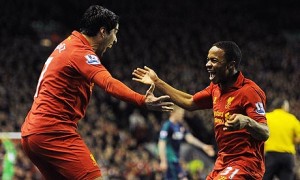 Liverpool got the New Year off to the best of possible starts on Wednesday by defeating Sunderland 3-0 at Anfield to move up to eighth place in the Premier League.

First-half goals from Raheem Sterling and Luis Suarez put Brendan Rodgers’ men firmly in the driving seat and Suarez added a third in the second half to seal a comfortable win.

For Sunderland it was a second straight defeat and it saw the Black Cats stay just four points above the drop zone.

Liverpool coach Rodgers was back in the dug-out after missing the QPR game on Sunday due to illness and he brought in Andre Wisdom at left-back in place of the injured Jose Enrique, with Lucas Leiva taking over from Joe Allen in midfield.

Sunderland manager Martin O’Neill, meanwhile, made one change to the side that lost to Tottenham Hotspur at the weekend, with the injured John O’Shea replaced by Danny Rose in defence.

Liverpool’s new signing from Chelsea, Daniel Sturridge, was in the stands watching his new team-mates, who were immediately on the defensive after a lively Sunderland start.