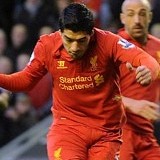 Striker Luis Suarez proved just how valuable he is to Liverpool with two goals and an assist to help secure only a second home win of the season as they beat Wigan 3-0.

The Uruguay international struck twice in nine second-half minutes and also played a part in the third which saw Jose Enrique score his first goal for the club.

Reports this week that Manchester City were ready to make a £40 million bid for the striker in January were dismissed by Roberto Mancini and Brendan Rodgers, with the latter confidently stating his prize asset was not for sale.

In any case, scoring in five successive matches to take his tally to 10 in as many appearances would appear to have boosted Suarez’s price tag by several million more. Steven Gerrard Ruled Out Of England Friendly Against Chile