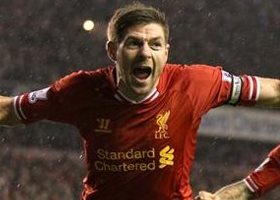 Daniel Sturridge becomes only the second player to score more than once in the first-half of a Premier League Merseyside derby, after Robbie Fowler (pen 15 & 21) in April 1999 in Liverpool’s 3-2 home win.

Luis Suarez now has 23 league goals in 18 Premier League matches – he has matched his total of 23 goals last season, achieved in 33 matches.