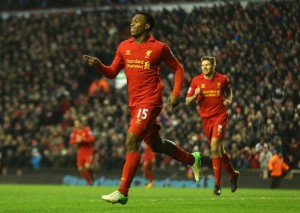 Luis Suarez put aside the latest controversial episode in his checkered Liverpool career by doing what he does best, scoring in the team’s 5-0 thrashing of Norwich in the Premier League on Saturday.

The Uruguay striker made the headlines for the wrong reasons this week by admitting he dived in a match against Stoke at the start of the season, earning a rebuke from manager Brendan Rodgers.

However, he remains invaluable on the pitch for Liverpool and after helping set up Jordan Henderson for a well-taken opener in 26th minute at Anfield, Suarez grabbed his 16th goal of the campaign 10 minutes later.

Daniel Sturridge – with his third goal in three games – Steven Gerrard and Ryan Bennett’s own goal completed the rout in the second half.