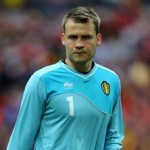 Liverpool have agreed a fee in excess of £11m with Sunderland for goalkeeper Simon Mignolet, according to Sky sources.

The two clubs are understood to have reached an agreement after protracted discussions and the Belgium international could now undergo a medical and discuss personal terms next week.

Mignolet, who moved to the Stadium of Light from Belgian side Sint-Truiden three years ago for £2m, still has two years remaining on his contract but Sunderland appear to have found it too hard to resist Liverpool’s overtures.

A deal will increase speculation over the future of the Reds’ established No 1, Pepe Reina.

The Spaniard has been linked with a summer return to Barcelona but has three years left on his own contract and has not yet been the subject of any approach.