Reports are out claiming that QPR are closing in on Marseille midfielder Mathieu Valbuena. 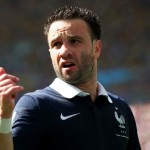 The Daily Star Sunday reported that the highly-rated star, 29, last week pulled out of a switch to Dynamo Moscow after deciding he did not fancy living in Russia.

But with Arsenal and Liverpool both still keen on the £7million-rated playmaker Rangers boss Harry Redknapp has now joined the hunt.

Rangers are prepared to meet Valbuena’s demands for wages of around £70,000 a week.