Reports are out claiming that Juventus wing- back Mauricio Isla is being linked with Liverpool. 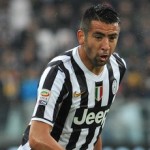 The Daily Star reported that Liverpool are set to battle it out with Arsenal for Juventus star Isla.

The Chilean can play in a number of positions on the right flank and both clubs cast an eye over him last season.

And with Glen Johnson’s future at Anfield in question, Brendan Rodgers is set to revive is interest.

Isla is currently rated at around £15milion but that could soar should his impressive World Cup form continue.