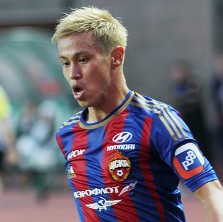 According to the Daily Star, the 26-year old Japan international is in the final year of his contract with the Russian club and it is believed that Liverpool are prepared to part with £12million for his services.

Honda, who has previously attracted interest from the Reds as well as Arsenal and Lazio, has scored six goals in 18 Russian Premier League appearances for a total of eight goals form 21 matches in all competitions.