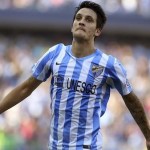 It has been reported that Liverpool attacker Luis Alberto has found himself sidelined at loan club Malaga this season.

The former Barcelona B star joined Malaga last summer, but has struggled to nail down a regular start.

Malaga coach Javi Gracia commented: “It is true that he plays less than he would like, but that’s just because the other players are doing very well.

“Luis is a very talented player with a promising future ahead of him.”

Alberto joined Liverpool 18 months ago from Sevilla in a £6.8 million deal.