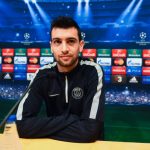 Reports are out claiming that Liverpool have joined the battle for PSG midfielder Javier Pastore.

Tuttosport says the Reds are now in the running, with Juventus and Barcelona both eyeing a summer swoop.

Despite an injury-hit campaign in France, the 26-year-old’s talent has drawn the attention of some of Europe’s elite clubs.

However, having paid £33million for Pastore from Palermo back in 2011, PSG are set to demand a sizeable fee at the end of the season.

Laurent Blanc’s side apparently want £23m, but Liverpool may have to act quickly with Chelsea said to have already made contact with the player’s representatives. REVEALED : Mario Balotelli Ruled Himself Out Of Liverpool’s Trip To Arsenal