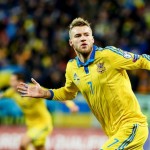 Reports are out claiming that Liverpool are favourites for Andriy Yarmolenko.

The Daily Express says Arsenal are set to miss out on Yarmolenko to Liverpool.

The Dynamo Kiev winger is believed to be wanted by Liverpool, Arsenal and Everton but his agent has dropped a massive hint that he is on his way to Anfield.

His agent, Vadim Shabliy, uploaded an image from Liverpool’s London offices, citing ‘transfer window’ in one of his hashtags.