Reports are out claiming that AS Monaco coach Leonardo Jardim has declared that Liverpool would’ve been the better option for Manchester United striker Radamel Falcao. 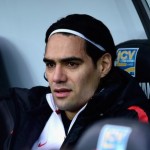 The Colombian international is on-loan at United from ASM.

Jardim told The Sun: “I think other clubs needed him more, such as Chelsea, Manchester City or Liverpool.

“I think at that moment it would have been easier to go to Chelsea, Liverpool or even Real Madrid.”