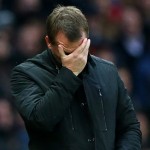 Reports are out claiming that Liverpool boss Brendan Rodgers is facing a frustrating January market.

The Daily Mail reported that Rodgers is unlikely to be given money to spend to boost his Liverpool squad in January – putting paid to his hopes of signing Fabian Delph.

Liverpool remain in the mix for the Villa midfielder, with Tottenham also in the frame, but any deal will be a free transfer in the summer.

Rodgers still wants a new goalkeeper and a striker to turn his side’s dismal season around, but is most likely to dip into the loan market.

However, if the Reds’ results continue to falter, plans for a January recruitment drive could change.