It has been reported that Liverpool boss Brendan Rodgers is remaining patient with Mario Balotelli despite another toothless performance by the Italian striker. 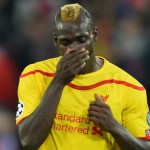 The 24-year old Italian international striker made it four matches in a row without scoring in Wednesday night’s 1-0 Champions League loss to FC Basel to see his tally remain at one goal from seven appearances in all competitions since arriving from AC Milan in the summer.

The former Manchester City striker toiled hard up front by himself for the Reds but was frustrated by the Basel defence and Rodgers admits he needs to bring something extra to his game if he wants to regularly hit the scoresheet.

“He worked hard, (but) needs to do more. He will be judged on what he creates and what he scores and he didn’t score,” he told Sky Sports 5 after the defeat.

“The boy is trying, he is working hard.”

Balotelli will get another chance to add to his Reds scoring tally when the Merseyside outfit host West Bromwich Albion in the Premier League on Saturday. Arsenal Icon Keown Convinced By The Quality Of Christian Benteke