It has been reported that Jurgen Klopp has described the reception he received from Liverpool fans in his first match in charge at Anfield as one of the ‘best moments’. 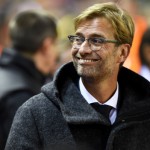 Klopp received a warm welcome from the Merseyside club’s supporters during the Reds’ 1-1 Europa League draw with Rubin Kazan.

The German said he could feel the positivity from the stands throughout the fixture.

“It was one of the best moments for me. I felt everything positive tonight and then I concentrated on the game,” Klopp said post match.

“Usually I don’t hear too much during the game and it works for me.

“But when you come for the first time in a new house, normally you have a present.

“I am not quite satisfied with my present tonight but it was only the first time and I will come again.”