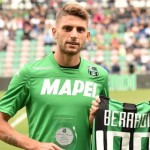 Calciomercato.com says Klopp has only been in the job a few hours, but he’s lining up Berardi as his first Liverpool signing.

Juventus reportedly hold a buy-back clause on Berardi, 21, that can be activated until the end of the season.