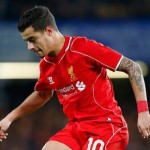 The Brazilian international’s strike was certainly fit to win the game and was an appropriate way to mark the signing of his new contract, which keeps him at Anfield until 2020.

Rodgers felt compelled to compare the Brazilian to his former striker Luis Suarez.

“He will become world class in the next couple of years. Luis Suarez grew and grew in this team and I can see Coutinho falling in the same way.”