Reports are out claiming that Liverpool boss Brendan Rodgers was left disappointed with defeat at Manchester United. 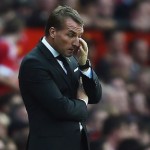 Daley Blind fired the hosts in front after a well-worked free kick before Ander Herrera scored from the penalty-spot after being brought down by Joe Gomez.

Anthony Martial came off the bench for his debut and scored United’s third with a superb solo effort after Christian Benteke had pulled one back with an acrobatic finish.

Rodgers questioned the decision to award United the free-kick that led to the opening goal.

“I thought first half we defended well but nowhere near had enough quality and composure on the ball,” he said.

“But defensively we weren’t bothered too much – any time we were frightened was by our own mistakes.

“We’re disappointed with a couple of the goals. I didn’t think it was a free kick – I thought Ashley Young bought the challenge.

“Nathaniel Clyne defended brilliantly all day and he’s just matched his run. You can see both of them challenging for the ball with their arms and Ashley Young actually jumps on his back.

“So they get a free kick against us, and they work it quite well when they get the goal. But I didn’t think it was a free kick.”

Arsenal, Liverpool To Do Battle For Werder Bremen Defender Per Mertesacker