Reports are out claiming that Liverpool skipper Jordan Henderson is a doubt for his side’s huge clash with Arsenal. 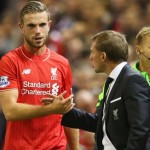 Liverpool prepare for arguably the biggest game of their season so far when they square off against the Gunners at the Emirates Stadium on Monday night and the Reds will surely be hoping to continue their fine start with a win against their rivals.

Ahead of the clash though, Liverpool have been potentially handed a huge blow with the news that Jordan Henderson could miss out due to injury.

Henderson was forced off against Bournemouth last Monday due to a foot injury and the midfielder has still not made a return to full training due to the problem.