Reports are out claiming that Steven Gerrard has just six definite matches left in his Liverpool career following Sunday’s 2-1 loss to Manchester United. 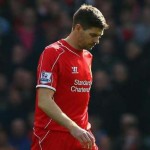 The Reds captain saw red for an inexplicable stomp on Ander Herrera in the 46th minute of his side’s defeat at Anfield which occurred less than a minute of him entering the field of play.

Gerrard, 34, departs the Merseyside club he has called home for so long at the end of the season to join MLS champions LA Galaxy for the next chapter of his sparkling career.

But the red card has cut his Liverpool time down by three matches, leaving him with just six, seven or eight fixtures to play, depending on their FA Cup quarter-final replay result with Blackburn Rovers.

Gerrard will certainly be sidelined for the Premier League trip to Arsenal on April 4 before sitting out the cup clash with Blackburn Rovers four days later prior to missing the April 13 home meeting with Newcastle United.

If the Reds get past Rovers, they will face Aston Villa in the FA Cup semi-finals at Wembley, with another date at the FA’s headquarters on the cards if they get past the final four and into the decider.

That means Gerrard, who made his debut for Liverpool back in 1998, has a minimum of six and a maximum of eight matches left for his beloved club with whom he has won the Champions League, UEFA Cup, FIFA Club World Cup, two FA Cups and three League Cups.