Reports have emerged claiming that Liverpool are in the hunt for Anderlecht wing-back Frank Acheampong. 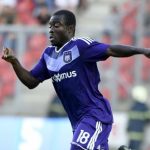 The Sun says the Ghana winger has shone for his club Anderlecht this season.

And Kop boss Jurgen Klopp has had him watched several times.

Acheampong, 23, can also operate at left-back. Rated at £6million, he is due to play at the Africa Cup of Nations next month.

Both Sunderland and Newcastle have shown interest in the speedy left winger in the past year.