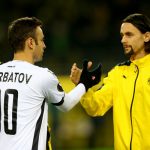 It has been revealed that Liverpool are eyeing Borussia Dortmund defender Neven Subotic.

The Sun says the Serbian centre-back, 27, is desperate to leave the Bundesliga after a frustrating season spent mostly on the sidelines under new manager Thomas Tuchel.

Liverpool, now managed by Subotic’s mentor Jurgen Klopp, have previously been linked with the 6ft 3in defender.

Klopp is also known to be seeking defensive reinforcements – although no kind of offer or discussions have taken place.

He told Kicker: “Currently it does not look like he will get more game time in the upcoming season.

“But he absolutely wants to play, and does not want to earn his money on the bench.”

Gramm added in Der Westen: “We are currently scouting the market.”