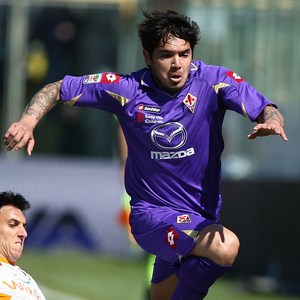 Transfer news from the Premier League is out and it has been revealed that Liverpool have made a move for Fiorentina fullback Juan Vargas.

Sources in Florence has revealed that Liverpool have made contact with Fiorentina over a move for the Peru international.

It is believed that the Reds have taken an offer in the region of £11.5 million to the table of the Serie ‘A’ side, although the Viola are thought to want more from Liverpool for the player.

Vargas, a versatile left winger who can also play in the wing back position, was reportedly close to joining Real Madrid from Catania before moving to the Stadio Artemio Franchi in 2008.

Liverpool Ready To Send Raheem Sterling Out On Loan