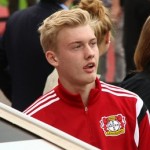 The Mirror reported that the Premier League pair have both sent scouts to run the rule over the Bayer Leverkusen midfielder this season.

The 18-year-old is already rated as one of the best prospects in the Bundesliga.

Brendan Rodgers has already made a personal check on Brandt on behalf of the Reds, and Jose Mourinho’s Londoners have now signalled their interest in the Under-19 international.