Reports are out claiming that Liverpool are close to an agreement for Bayern Munich winger Xherdan Shaqiri. 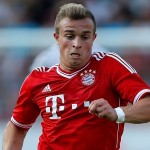 The Daily Star reported that the Reds lodged a £15m bid for Shaqiri last week with manager Brendan Rodgers intent on bolstering his squad ahead of a return to the Champions League next season.

And according to reports in Shaqiri’s native Switzerland, Liverpool are close to clinching his signature.

If the 22-year-old completes a switch to Anfield, he would become Liverpool’s third summer signing following the arrivals of Southampton forward Rickie Lambert and Bayer Leverkusen midfielder Emre Can.