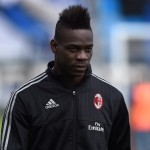 Reports are out claiming that Liverpool are desperate to find a buyer for Mario Balotelli.

The Daily Mail reported that the Italian striker, who had a dismal first season on Merseyside, is expected to return to Anfield once his loan with AC Milan expires.

Milan are paying around £70,000 of his £90,000-a-week wages and Liverpool fear they will have to recommence paying his wages in full.

They may struggle to find a new club for Balotelli who has managed just eight goals in two seasons.

It is suggested Liverpool may even consider a package to release the former Manchester City striker.