Reports are out claiming that Liverpool is closing on the signing of Lazio youngster Keita Balde Diao. 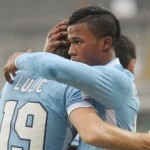 The Daily Express reported that Reds boss Brendan Rodgers has already secured the services of Belgian youngster Divock Origi from Lille, but the former Swansea City manager is desperate to snap up Diao ahead of Louis Van Gaal’s Manchester United.

Reports in Italy claim that Lazio have already rejected a bid from the Anfield club, but it is believed that Liverpool will return with an improved offer for a player who struck an incredible 47 goals in a single season whilst out on loan at Spanish side UE Cornella, the same team which Barcelona left-back Jordi Alba was sent to, in the 2010/11 season.

Diao, who was born in Spain to Senegalese parents, spent seven years at Barcelona’s famed academy.