It has been revealed that Liverpool are eyeing a shock move for Manchester United striker Javier Hernandez. 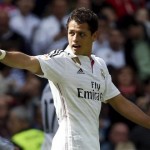 Chicharito, after last season’s loan with Real Madrid, has been put up for sale by United this summer.

AS reported that a return to Spain could happen for the Mexican, with Atletico Madrid keen.

However, Liverpool are eager to keep the striker in England.

Liverpool, Inter Milan and Juventus are all competing to land Hernandez.

And it’s claimed he will be available on a free transfer this summer.