Reports are out claiming that Liverpool failed with a late move for Dynamo Kiev star Andriy Yarmolenko on deadline day. 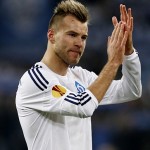 TMW reported that the front man had a £14.5million release clause, but the Reds are thought not to have met the amount as their attempts were rebuffed.

Yarmolenko has been linked with Liverpool a host of times in recent transfer windows – and the Reds are finally thought to have made their move.

However, negotiations barely kicked off and a deal was not struck.