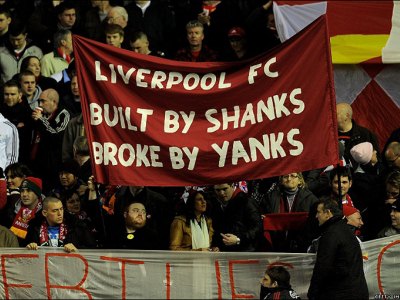 Sensational news have emerged and it has been revealed that Liverpool would be at risk of a nine-point deduction if the owners’ holding company is put into administration.

At first it was thought that the Premier League would not penalise the club for Kop Holdings becoming insolvent, but now the threat of a points deduction has become a serious one.

Kop Holdings, the company owned by Tom Hicks and George Gillett, could be put into administration by The Royal Bank of Scotland if the Americans continue to block a takeover by New England Sports Ventures and have not paid off their £280million debt to the bank by October 15.

The Premier League rules are clear, and the fact that the holding company is solely concerned with the ownership of Liverpool and football-related matters could trigger the nine-point penalty.

An insider told Press Association Sport: “It is not completely clear whether the nine-point penalty would come into play but it would be a risk.”

Hicks and Gillett’s legal action against the proposed takeover will begin in the High Court next week.