Reports have emerged claiming that Liverpool boss Brendan Rodgers hopes to have Mario Balotelli available for their clash with Manchester United. 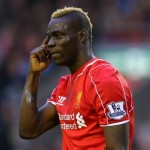 The Daily Star reported that Rodgers desperately wants him back for the trip to Old Trafford – if he is fully-fit.

Liverpool trail their bitter rivals by seven points heading into the game.

The Italian international striker has scored just two goals since his £16m move from AC Milan and has yet to find the net in the Premier League.

However Rodgers has been having to rely on the out-of-form Rickie Lambert in his absence with Daniel Sturridge still recovering from a thigh problem.