Reports are out claiming that Liverpool chief Ian Ayre is locked in talks with Sevilla today for fullback Alberto Moreno. 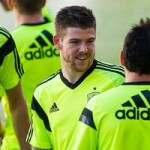 The Mirror reported that Ayre was in Spain on Monday to finalise a season-long loan switch to Sevilla for forward Iago Aspas, which also gives the Spaniards the option to buy next summer, but also had long-term target Moreno on the agenda.

Negotiations are edging forward as the two clubs attempt to find a compromise price.

Sevilla want an ambitious £20m, but Liverpool believe they can eventually get the Spain star for around £14m.