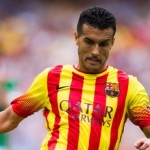 It has been reported that Liverpool and Juventus are eyeing Barcelona attacker Pedro Rodriguez.

TMW reported that Juventus are lining up a January bid for Pedro as a priority signing.

Juve are turning to Pedro after initially considering a move for Manchester United midfielder Juan Mata.

However, they’ll face competition from Liverpool, where manager Brendan Rodgers is eager to boost their attacking options after stumbling in the opening weeks of the season.