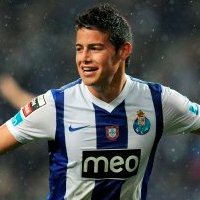 Sensational news are out and it has been revealed that Liverpool are preparing a massive offer for Porto star James Rodriguez.

The 20 year old Colombian international winger is said to be high on the shopping list of Manchester United manager Sir Alex Ferguson.

However, Correiro da Manha reported that Liverpool are willing to offer €30 million to beat United for Rodriguez’s transfer.

I Was Surprised Chelsea Sold Me! – Juan Mata