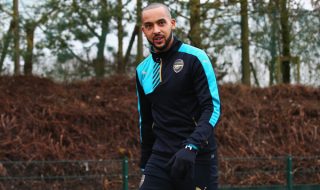 Reports have emerged claiming that Liverpool legend John Barnes insists Arsenal attacker Theo Walcott can play his way back into the England squad.

Walcott was omitted from Roy Hodgson’s 26-man squad for Euro 2016, which begins on 10 June in France, with the England coach saying the 27-year-old’s lack of regular game time with the Gunners and his injury woes last season are the reasons behind his decision.

“There is no player, apart from Wayne Rooney, Harry Kane and Jamie Vardy, who should be in the squad,” Barnes told the London Evening Standard.

“There are not many players to come in and choose from. He [Walcott] has not featured for Arsenal and I don’t think Theo would necessarily be one of the first names on the teamsheet of an England side in the past, so the fact he hasn’t played a lot doesn’t mean he should have been in the squad.

“It’s not that much of a surprise. But we have a lot of young players in the side so we need experience. He’s not really featured that heavily [last season].

“He’s not Wayne Rooney. If he didn’t feature for Manchester United, I’d still think you’d need Wayne in the squad.